KEVIN BRIDGES ANNOUNCED AS HOST OF STAND UP AGAINST MND

Stellar Scottish stand up Kevin Bridges has just been announced as the host of Stand Up Against MND – the show which sees a galaxy of comedy stars coming together at the Glasgow Live International Comedy Festival to raise funds for MND Scotland. 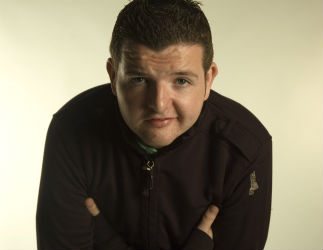 The night is dedicated to the memory of Motor Neurone Disease patient and campaigner Gordon Aikman, who died from the condition last month at the age of 31.

Gordon was diagnosed with the terminal, muscle wasting condition at the age of 29 in 2014.  Following his diagnosis, he formed the Gordon's Fightbackcampaign raising over £500,000 for research to help fund a cure for the disease.

“Stand Up Against MND” is in its third year. In that time it has raised over £30,000 in support of Gordon’s Fightback and MND Scotland.

Kevin Bridges said: “I can’t wait for this show; it’s going to be a good laugh for a great cause. There’s a top line-up and it’s bound to be an excellent night of stand-up.

“We’ll also be raising some serious money for MND Scotland and Gordon’s Fightback, so get your tickets now and help fund a cure for this brutal disease.”

Lawrence Cowan, close friend of Gordon Aikman and Chair of MND Scotland, said: "Motor Neurone Disease killed my best friend.  Every ticket you buy for this show will help fund a cure for future generations.

"Gordon was really excited about this year's show.  He would have loved to see Kevin and so many brilliant comedians come together to fund cutting-edge research into MND.

“This will be the event’s third year running and in that time it has raised over £30,000 in support of Gordon’s Fightback and MND Scotland.

“The fightback will not stop until we cure Motor Neurone Disease.  With your help we can make a cure a reality.”

Alongside host Kevin Bridges, Stand Up Against MND features:

Des Clarke - 'so funny it's almost painful to watch him perform. Genius in action.' Metro

Full details for Stand Up Against MND: