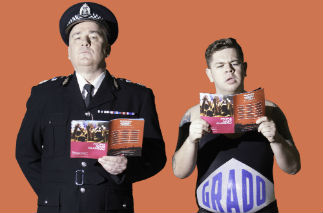 The Glasgow International Comedy Festival (GICF) reveals its full programme, as this hugely popular event in the comedy calendar gears up to return for its 14th year from Thursday 10 – Sunday 27 March 2016.

The bumper line-up for the eighteen-day festival includes: critically-acclaimed stand up from Frankie Boyle who has recently added a third night to his run at the Clyde Auditorium; character comedy from Scot Squad’s Grado and Chief Commissioner Cameron Miekelson, both appearing live at the Kings Theatre; Greg Proops recording his The Smartest Man In The World podcast; 2 nights with with the QI Elves; and Bob Slayer’s award-winning double decker Blundabus pulling up for a residency at Candleriggs, where a ticket to ride might get you comedians playing Hungry Hippos, storytelling and gossip, or the genius of Phil Kay.

The Festival has earned a reputation for its strong selection of international acts, this year bringing Will Franken, Scott Capurro, John Hastings and Jena Friedman to the city, while American Stands Up! introduces some of the most exciting comedians working in the States right now in what is always a sell-out showcase.

As well as large scale stand up and intimate gigs in pubs, GICF presents film screenings at the Govanhill Baths and the Grosvenor Café; solo shows from Scott Gibson, Doug Segal, Sean Hughes and Alan Bissett at the Tron; comedy for kids at The Stand Comedy Club and the Citizens Theatre; and discussions on comedy, women, feminism and more with Standard Issue, and the role of satire with the Sunday Herald.

Events take place every day throughout the Festival including sketch shows, plays, lunchtime comedy, and late night Festival clubs. Tickets for all shows are on sale now, with some performers, including Grado, Adam Hills and Russell Kane already adding extra nights due to popular demand.

You can download the 2016 programme from the GICF website, or pick up the Sunday Herald this weekend (17th Jan) for a free copy.

We’re delighted to announce that Scottish Citylink are one of our travel partners for 2016!

As the nation’s leading provider of long distance express coach services, Scottish Citylink take over three million passengers to more than 200 destinations every year, throughout the year. Their reliability, courtesy and value for money keep customers coming back (and forward) time and again – their ‘900’ service between Edinburgh and Glasgow provides 50 journeys each way, every day, complete with superfast free wifi 4G. All for £7.50 single or £11.40 return.

The Scottish Citylink "Gold" coaches between Glasgow and Aberdeen or Inverness provide an even more luxurious trip, with leather seats, free wi-fi and free tea and coffee on the bus.

If all that doesn’t make you smile, then merely consider the sheer ease of travelling with Citylink – easy boarding, comfortable seats, a professional doing the driving for you while you sit back and relax … and the hassle of parking can take a back seat too.